As India anticipates the beginning of this year’s monsoon season, forecasting agencies are beginning to issue their predictions for summer rainfall. Weather forecasting agency Skymet has anticipated a slightly drier than usual monsoon season for the country as a whole, at 95% of normal (note that drought typically occurs when rainfall decreases to 90% of normal).  The Indian Meteorological Department’s (IMD) 2017 monsoon forecast prediction is almost exactly the same, though they classify this as lying within the range of average rain levels. 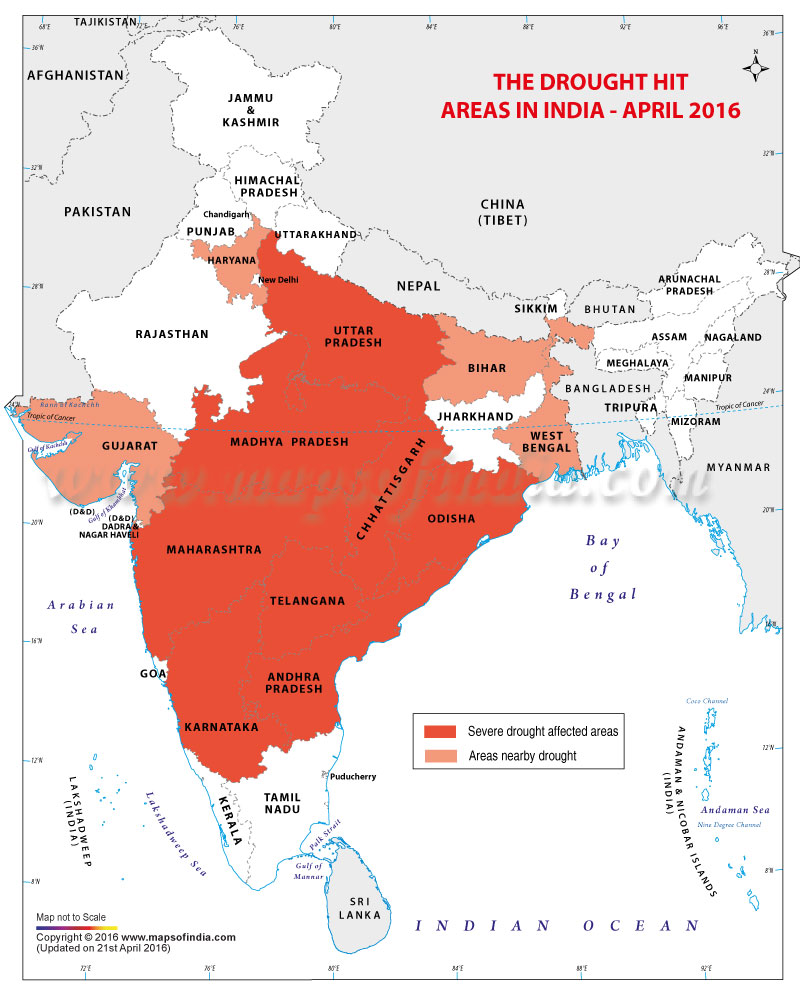 Other forecasting centers make slightly different predictions.  The IRI at Columbia University predicts a likelihood of above-normal rain over the northern part of peninsular India with below-normal rain to the south.  The Asia-Pacific Climate Center predicts near-normal rain until June, then dryness over the western parts of the country from July onward.

The South Asian monsoon, which affects India and several nearby countries, is a prominent atmospheric circulation system bringing crucial rainfall to the region annually. Rains are usually heaviest in June and July, although the monsoon can begin as early as May and end as late as September, depending on the year. Summer monsoon winds travel through the country from the southwest, bringing an average of 75% of the country’s annual rainfall.

March and April heatwaves were the result of winds traveling south from Pakistan. They affected cities like India’s Nashik, which just experienced its hottest March in over a decade. The IMD had predicted that the heat would last through April, bringing record-breaking temperatures to already-warm regions. K Sathi Devi, head of the IMD’s National Weather Forecasting Center, has predicted high spikes in temperatures to continue throughout the monsoon season.

Below-average rainfall is expected to affect the Indian regions of Goa, Gujarat, Karnataka, Kerala, Konkan, Maharashtra, and Tamil Nadu. Several of these states are included in the eight Indian regions facing drought conditions this year. Jharkhand, Odisha, and West Bengal, on the other hand, will likely experience normal rainfall levels through the monsoon season. Skymet CEO Jatin Singh predicts that rainfall will be heaviest for the first month of the season.

If sufficient rains do not arrive, warm temperatures and drought conditions can become dangerous. Already this year, six Indians died in a heatstroke in the state of Odisha. As reported by the IMD, over 700 died as a result of weather conditions last year in the country.

Below average precipitation could also have agricultural and economic consequences for the country. Although India is home to over 15% of the world’s population, it has just 4% of the world’s water resources. Additionally, as only 35% of the country’s agricultural land is irrigated, a large portion of the country depends on rainfall for farming. Both crops and livestock that are crucial for subsistence farming and economic health, particularly in rural areas, rely on the Indian monsoon.