India’s first forecast for the 2018 summer monsoon season was just released, and it is for a near-normal amount of rainfall over the country as a whole.  In particular, based on their statistical model and their relatively new numerical model, they are predicting 97%±5% of the historical average.  More details on the India Met Dept website (find the link in the right-hand bar of scrolling news).

They also cite a ‘low probability’ for deficient rainfall, meaning that there is a 42% chance the rainfall will be in the ‘normal’ range of 96-104% of the long-term average. It’s interesting that their probability breakdown gives a higher probability of low rainfall (44% chance) than of high rainfall (14% chance), but it’s unclear whether their statistical model has enough skill for such subtleties to be meaningful.

Columbia’s IRI also updated its global seasonal forecast on April 15, and the only notable change for monsoon regions is that Mexico is no longer forecast to be wetter than normal during the spring/early summer.  Mexico didn’t have anomalously high rainfall in April thus far, and it doesn’t look like the current weather models are forecasting high rainfall there over the next week, so this actually seems like a change in the spring forecast:

Combined with their July-Sept forecast, this makes it look like India’s country-averaged, seasonal-mean rainfall might indeed be normal, but only because the country will be wet in the northeast during early summer and dry in the south during late summer:

The ENSO forecasts still have La Niña transitioning to a near-neutral ENSO index, but this again is made up of warmer water in the north Pacific and Atlantic, and relatively cold water south of the equator in both of those ocean basins.  Given research showing how the tropical rainfall maximum can shift north-south into the hemisphere with the warmer ocean, this helps justify the idea that Africa may be wetter in the northern parts of the Sahel and drier in the south, and that India may also be wetter in the north and drier in the south. 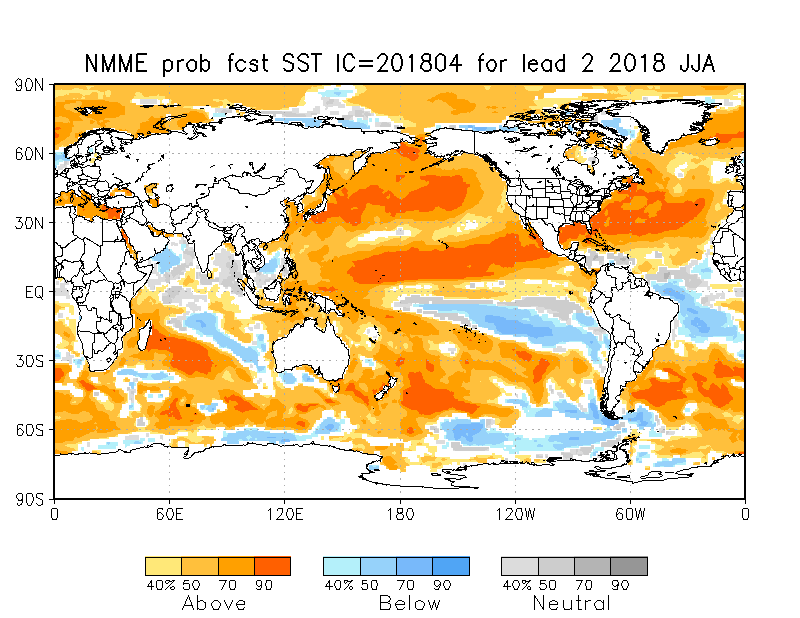