A 7.3 magnitude earthquake hit Nepal last Tuesday, only two weeks after a devastating 7.8 earthquake shook the country on April 25th. These earthquakes killed over 8,000 people and displaced close to 3 million others. 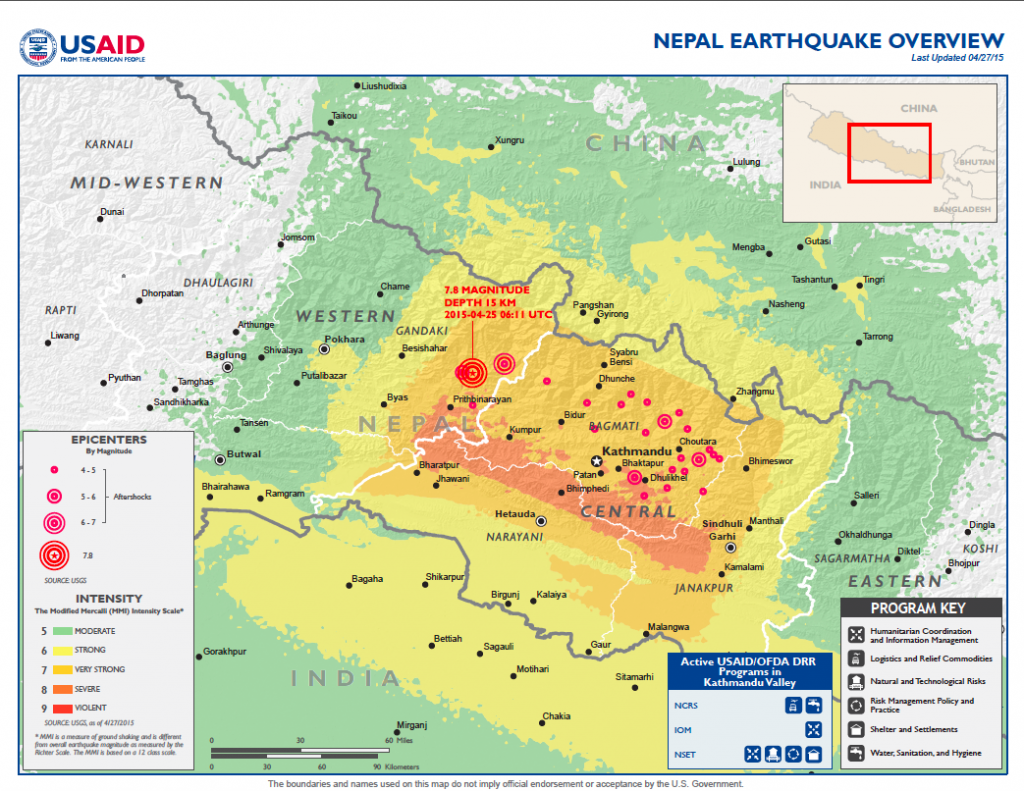 Today, Nepal’s government and organizations are struggling to rebuild critical infrastructure and provide those affected with food and shelter.

Many factors have made relief efforts challenging, including Nepal’s mountainous terrain, the high proportion of Nepalese people living in rural areas, and limited funding. These efforts are further complicated by the impending monsoon season.

Nepal’s monsoon season is expected to begin in June, giving aid workers between three and five weeks to prepare for heavy rains. The monsoon season usually lasts from June to September, bringing Nepal 80 percent of its precipitation for the year. Nepal’s average annual rainfall is 1.6 meters (about 5 feet), with some regional variation across Nepal.

With monsoon season comes many risks for Nepalese people. Heavy rains lead to water-borne diseases, sanitation problems, the contamination of drinking sources, and worsened living conditions. The impending monsoon will also present challenges for the Nepalese government and international organizations attempting to deliver aid. To combat these threats, the government and aid organizations are focused on improving infrastructure and sanitation before the monsoon hits.

The earthquakes destroyed or damaged much of Nepal’s sanitation and water infrastructure, including water pipes and latrines. In response, the Nepalese government has announced a plan to construct temporary pit latrines in the weeks before the monsoon hits. They hope to build one latrine for every 50 Nepalese males and every 30 Nepalese females.

Aid organizations such as the UN and OCHA have focused on providing temporary shelter for families whose homes were rendered uninhabitable by the two earthquakes. It is imperative that these temporary shelters be provided prior to the start of the monsoon season in order to give earthquake victims protection from health risks brought by heavy rains.

While some displaced people use “Shelter Kits” provided by agencies such as the UK’s Department for International Development, others use vegetation and materials found in rubble to build shelter for their families. Buildings that survived the earthquakes are also being used as emergency shelters, including schools and some governmental buildings.

The monsoon will also cause logistical problems for the Nepalese government and aid organizations. Rainstorms will make travel and the transport of food and supplies to remote communities especially difficult. Relief operations will not only encounter flooding and mountainous terrain when attempting to deliver aid, but an increased risk of landslides, a result of earthquakes worsened by the start of monsoon season. Helicopters, which are often used to deliver aid to hard-to-reach regions, will be grounded by the heavy rains, as well.

Relief workers are attempting to combat these logistical barriers by changing the methods they use to reach affected populations. In lieu of vehicles, some aid workers have begun to carry supplies to rural communities by foot. Other workers have been using mules, donkeys, and paid porters to deliver supplies to remote locations. The Nepalese government has also taken advantage of social media as a way of warning citizens of impending rainstorms and informing citizens of where and how to acquire supplies and relief. With funding low, many relief organizations are having difficulties implementing relief operations before the start of the monsoon season. The United Nations, for example, has announced that it has only raised 20 percent of the estimated $432 million necessary to carry out its planned relief operations.