In June, the India Meteorological Department published a seasonal forecast predicting that the southwest monsoon would bring “below normal” levels of rain to India at 90% of average rainfall. As of August 10th, monsoon rainfall was below this prediction by 6%, at 84% of average rainfall.

Today, India faces a 16% rainfall deficit. As a result, Indian communities are feeling the strains of water shortages as they enter into a second year of drought. According to recent meteorological data, the southwest monsoon could begin to withdraw from northwest India in the next three or four days. The monsoon has already withdrawn from parts of Rajasthan, Punjab and  Haryana, and now appears to be passing through Amritsar, Hisar, Ajmer, and Barmer. 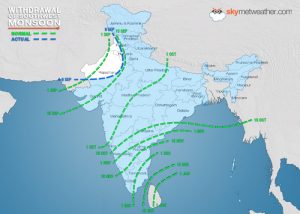 This would leave one quarter of the country in a rain deficit. In fact, 91 key reservoirs across India have recorded less water reserves as compared to this period last year. Reservoirs in the South face the most serious deficiencies, with reservoirs in East and West India facing less severe deficits.

On September 10th, the 91 key reservoirs were recorded as filling only 59% of their storage capacity. An official statement released Friday by the Ministry of Water Resources explained that, “This storage is 77% of the storage of corresponding period of last year and 81% of storage of average of last 10 years.”

Indian citizens are already experiencing the impact of these rainfall deficits. In response to low reservoir water levels, the Water Resources Department has restricted the amount of water used for purposes of power generation.

Resulting power shortages have led to multiple unscheduled power cuts over the last week in the Indian state of Odisha. Power suppliers are now in the process of implementing statewide scheduled power usage regulations to conserve energy until the situation improves. Power shutoffs in urban areas are expected to be from one to two hours long, while rural areas will face more severe restrictions.

Deficient monsoon rains may also lead to low agricultural yields. The southwest monsoon’s rains irrigate almost half of India’s agricultural land, including many small family farms. Forecasts predict that this year will be the driest since 2009, leaving soil too dry to sustain winter crops.

Earlier this week, RPG Foundation President D. H. Pai Panandiker explained that the weak monsoon could cause agricultural production to fall by nearly 3% this year. Poor families living in rural areas could bear the brunt of this decrease, as many poor Indian families rely on crops from small family farms for sustenance and economic stability.

Although shortages as a whole have increased, some states have collected more water this year than the last. These include Himachal Pradesh, Punjab, Rajasthan, West Bengal, Tripura, Gujarat, Uttarakhand and Madhya Pradesh. While rains from these areas have not been sufficient to make up for the water deficit, they have caused dangerous flooding in hundreds of Indian villages.

As of September 1st, nearly 800,000 Indian citizens had been forced to leave their homes, and 21 others were killed as a result of the floods. India’s disaster management authority announced that 168 relief camps were sheltering nearly 50,000 of those displaced by the flooding.

← Heavy rains, flooding prove deadly in Myanmar A summer of floods and hurricanes in Arizona ends with high temperatures →