El Niño and climate change cause drought in southern Africa

According to data collected from annual reports on rainfall in southeast Africa, mean summer rainfall has been steadily declining in the region over the past 200 years. It is suspected that this drying trend has been significantly influenced by climate change. Indeed, most climate models predict a reduction in rainfall over southern Africa in the next century, although there is less agreement amongst models for the northern parts of the continent. Today, we see strong year-to-year variability superimposed on these trends as African countries face both severe droughts and flooding.

Many African nations faced severe droughts this past summer, including Tanzania, Kenya, Ethiopia, and Somalia. Strong El Niño conditions are expected to bring some relief to these countries over the next few months, as El Niño is typically associated with enhanced rain over east-central Africa. Although heavy rains are expected to be beneficial in these areas, storms also have the potential to cause dangerous flooding, particularly in the Horn of Africa. 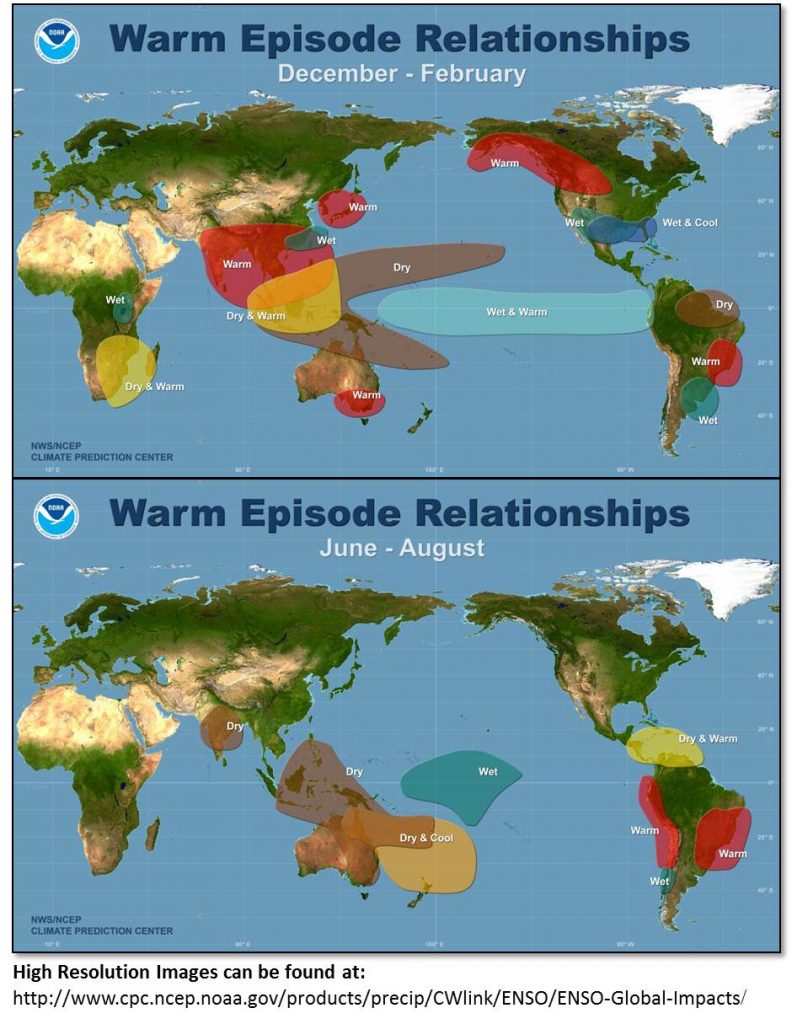 South Africa, by contrast, is typically drier than usual during El Niño. If this region receives less rain than usual, this would compound existing dryness: the 2014/2015 season was the third-driest South Africa had seen in eighty years. In recent weeks, South Africa has faced several heat waves, some affecting the country’s maize belt. In response to water shortages, the South African government has imposed water restrictions in certain cities, and urged livestock farmers to limit their herd sizes to preserve water supplies.

According to David Nash, University of Brighton College of Life, Health and Physical Sciences professor, this year’s El Niño weather pattern could bring risks of serious droughts in southern Africa. In an interview with The Argus newspaper, Nash explained, “The timing of droughts shows a strong relationship with El Niño events, particularly during the latter half of the 19th century. Drought events were particularly severe during the rainy season immediately following an El Niño event.”

Droughts like these could be extremely threatening to food security in many areas of southern Africa, where 29 million people are food insecure and low levels of rainfall could lead to the death of livestock and reduced grain and cereal yields. In the past, weather crises like these have led to significant increases in staple food prices across African countries. In 2011, for example, staple prices were 68% higher than the region’s five-year average as a result of drought conditions. According to the United Nations, the countries most affected by staple price inflation often include Somalia, Ethiopia, and Kenya.

Southern Africa is particularly susceptible to the effects of climate change. According to recent climate models and research, it is possible that temperatures in southern Africa will increase one and a half times more quickly than the global average temperature increase in coming years.

In response to these threats, the World Bank has invested $US16 billion in a plan to help African countries prepare for and respond to climate change and its effects. This plan aims to help African countries “highly vulnerable to climate shocks” prepare for changes in weather patterns that could affect anything from health to infrastructure to crop production. It also includes efforts to boost clean energy production and increase access to electricity.